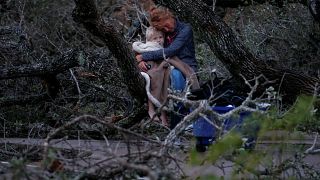 Hurricane Harvey has reduced some coastal communities to virtual ghost towns as it barreled along the Texas coast before making landfall near the city of Rockport. In the adjoining city of Aransas Pass, Harvey left a trail of debris, damaged property, and broken tree branches. A trailer park full of RVs proved no match for the powerful storm system that flipped over and destroyed several of the large vehicles. Crews were seen going door-to-door looking for survivors possibly trapped inside the vehicles. While thousands fled the expected devastating flooding and destruction, some residents defied mandatory evacuation orders. Fueled by the warm waters of the Gulf of Mexico, Harvey became the first Category 4 hurricane to wallop the United States since Charley in 2004 and the first to hit Texas since Carla in 1961.