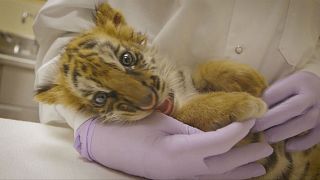 US border guards save tiger cub

Updated: 26/08/2017
<p>A tiger cub, confiscated by U.S. Border Patrol agents on August 22, has found a new home at the San Diego Zoo Safari Park. The male Bengal cub was seized after officers found it while investigating a car crossing the U.S.-Mexico border and brought to the zoo for treatment.</p> <p>“He does have teeth, they’re coming in. He’ll be teething in the next week or two. That will probably be a little chore for everybody. Get him through that. He’ll be chewing on everything. But otherwise, I listened to his heart. His heart and lungs sound good and overall he’s in pretty good shape,” said San Diego yoo lead veterinarian Dr. Jim Oosterhuis.</p> <p>Veterinary staff have determined the cub, estimated to be 5 to 6 weeks old, is in good health. They will care for him until his permanent home is decided by the U.S. Fish and Wildlife Service.</p>
no comment