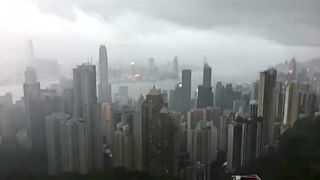 As winds intensified and rain lashed down, many skyscrapers in the heart of the financial centre were in darkness as the city battened down for one of the worst storms in years. Hato churned up water in Hong Kong’s iconic Victoria Harbour and triggered large swells and massive waves on some of the city’s most popular beaches, with the weather observatory warning of serious flooding in low-lying areas.

Maximum winds near Hato’s centre were recorded at a destructive 155 kmh, (95 mph). Gusts in some residential areas were already causing damage, sending tarpaulins, roof screens and tree branches flying through the air. A senior scientific officer for the Hong Kong observatory said sea levels could rise up to five metres, (15 feet), in some places.

The weather observatory said Hato will be closest to the territory in the next few hours, skirting about 50 km, (31 miles), to the south of Hong Kong.