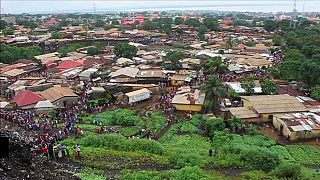 At least eight people died and others were injured in Guinea on Monday, (August 21), when a portion of a rubbish landfill site collapsed on houses on the outskirts of the capital, Conakry following torrential overnight rain, police and government officials said on Tuesday.

The disaster followed landslides in Sierra Leone and Democratic Republic of Congo in which hundreds of people have been killed since early last week. Authorities have said that heavy rain in the region could cause more deaths.

Monday’s incident in Guinea occurred in the morning in the Dar Es Salam neighbourhood after the overnight deluge. The area is filled with wooden and tin-roof houses, some of which are situated at the base of a towering mass of refuse. A senior police source said said the government was preparing to raise its death toll on Tuesday after finding three more bodies.

A young girl was pulled alive from the debris and rushed to medics in the arms of a rescue worker. Shifting rainfall patterns, rampant deforestation and expanding urban populations are increasing the risk of deadly mudslides across west and central Africa, experts have said.