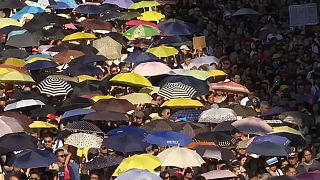 Thousands of people in Hong Kong protested the jailing of three pro-democracy leaders for their roles in the so-called umbrella revolution nearly three years ago.

It is the latest sign that tolerance for dissent is waning in the Beijing-ruled former British colony.

The three were found guilty last year of leading or encouraging an illegal rally in September 2014.

Activists had brought the city to a standstill for weeks to protest against Beijing’s plan to restrict elections in Hong Kong.

Yellow umbrellas became a symbol of revolution after the activists used them to fend off police pepper spray attacks.