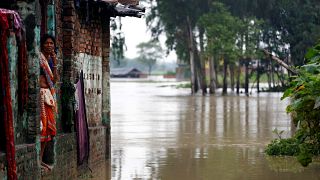 Travellers waded through deep water at Janakpur Airport in Nepal on Sunday (August 13) after landslides and flooding triggered by heavy rain killed at least 47 people.

The flooding in southern Nepal left thousands homeless and police said they expected the number of people killed to go up, with around two-dozen others missing and feared dead after three days of heavy downpours.

Landslides and flooding are common in the Himalayan region during the monsoon season, which runs from June through September.