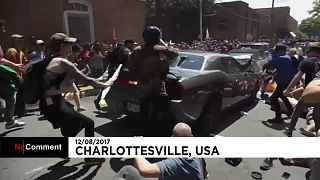 Dueling groups of protesters gathered near the statue of Confederate general Robert E. Lee in Charlottesville, Virginia ahead of a planned rally by white nationalists on Saturday morning (August 12).

Dueling groups of protesters gathered near the statue of Confederate general Robert E. Lee in Charlottesville, Virginia ahead of a planned rally by white nationalists on Saturday morning (August 12).

The ‘Unite the Right’ rally that was scheduled to start at midday, was planned in protest against the removal of Lee’s statue from a public park.

Clashes broke out between Confederate flag-toting white nationalist groups, that included the KKK, and large groups of counter-protesters.

Soon after the melee erupted, Virginia Governor Terry McAuliffe declared a state of emergency in the city. The gathering was declared an “unlawful assembly,” allowing police to disperse the protesters.

At least three people have been killed and 35 others injured. One of those killed, a 32-year-old woman, died after a car ploughed into protesters as she was crossing the street. Two Virginia State Police officers were also killed when their helicopter crashed near Charlottesville.