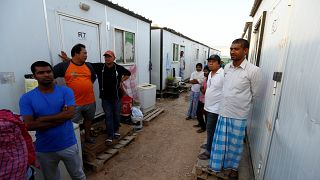 Saudi cracks down on 'illegal expats'

Updated: 08/08/2017
<p>Immigrant workers in Saudi Arabia fear deportation or even jail under a promised crackdown on “illegal expatriates”, with many complaining of unfairness as employers and authorities fail to return vital documents.</p> <p>For four months, texts from the government pinged into every mobile phone in Saudi Arabia ordering “illegal expatriates” to leave the kingdom before the end of an amnesty that expired in late July. The campaign, “a nation without violators,” warned of fines, jail time and deportation for anyone caught without valid identity documents after the grace period, in a renewed push to reduce the kingdom’s abundant black market in labour. Saudi authorities estimate more than 600,000 people took the amnesty, which allowed any foreigner in breach of residency laws in the world’s top oil exporter to leave without penalty. But millions of others have remained, either determined to stay or unable to avail themselves of the offer. Now they are awaiting a pledged crackdown against what Riyadh calls the “reckless people” who defied the order to leave. “We don’t know what will happen to us,” said Atif Alam, 28, an Indian worker at a desolate labour camp in eastern Riyadh who fears a police raid. He rarely leaves the camp, wary of being seized at police checkpoints on roads throughout Riyadh.</p>
no comment