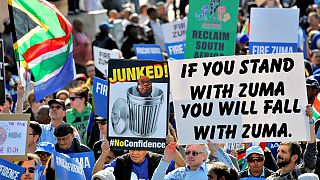 Protesters call for Zuma to go in South Africa

In Cape Town, where the South African parliament is located, thousands of opposition supporters held a rally on Tuesday, (August 8), as a parliamentary debate on a motion of no-confidence in the scandal-plagued President Jacob Zuma was underway.

Protesters were carrying posters saying “Fire Zuma” and a cartoon of Zuma in a dustbin. The leader of the opposition Democratic Alliance urged South African lawmakers to oust President Jacob Zuma at the start of a parliamentary debate on Tuesday.

Zuma, who has held power since 2009, would have to relinquish office if he loses the vote expected once the debate ends, however lawmakers in South Africa’s ruling African National Congress (ANC) pledged to back President Jacob Zuma in a no-confidence motion in parliament.