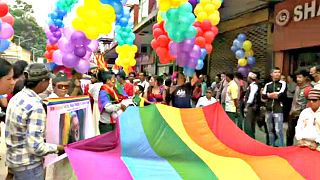 Nepal’s LGBT community has been adding sparkle to one of the conservative Hindu-majority country’s most popular festivals.

Flamboyantly-dressed revellers celebrating LGBT Pride joined hundreds of participants in Kathmandu on Tuesday who were marking the Gai Jatra festival, also know as the procession of cows.

The annual parade, usually in August or September, is considered by the LGBT community as an opportunity to freely express themselves.

Nepal has become increasingly progressive regarding LGBT rights since a decade-long Maoist civil war ended in 2006, and a feudal monarchy was abolished two years later.