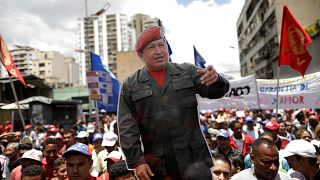 Many wore red t-shirts and hats in support of the socialist party, as they danced to music and carried banners in support of Chavismo – the left wing ideology based on the ideas of former Venezuelan president Hugo Chávez..

Thousands are gathered in Caracas, Venezuela, to celebrate the triumph of the National Constituent Assembly. pic.twitter.com/NXlcPv0r2E

However, as jovial as they looked, some couldn’t ignore the challenges ahead for the newly elected body.

“We have to deal with some obstacles”, said Jesus Farias, a member of the newly-founded assembly and a former member of parliament.

“One of the problems that we have to solve is the relationship between the National Assembly and the Constituent Assembly.”

In theory, both governmental bodies can rule simultaneously, but the the controversial new Constituent Assembly has the authority to override the National Assembly and has been tasked with rewriting the country’s constitution, drafted by Chavez in 1999.