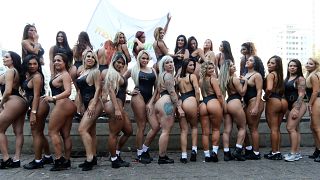 In its sixth year, Miss Bumbum received several hundred applications, with representatives in Sao Paulo from each of Brazil’s 27 states, 15 of whom will be selectioned to fight it out in November’s final.

Competition organiser and journalist Cacau Oliver, said the event aimed to represent the wonders of Brazil, where Carnival performers have been known to take out insurance policies on their behinds. Oliver added the competition represents the ideal of a Brazilian woman, which includes women with disabilities.

Contestants of the Miss Bumbum competition have to prove that they have not undergone surgery nor used chemical products on their bottoms.