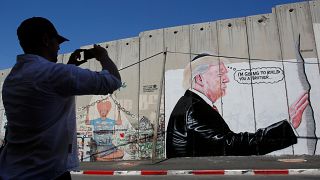 Updated: 04/08/2017
<p>While Donald Trump’s bid to build a wall along the Mexican border has upset some, at least he has left a lighter mark on Israel’s equivalent.</p> <p>Giant spray-painted images of the US president have appeared on concrete barricades erected by Israel around parts of Bethlehem, providing comic relief for Palestinians.</p> <p>“I’m going to build you a brother,” reads one, a nod to Trump’s campaign promise to construct a wall on the US-Mexican frontier.</p> <p>In another, he hugs an Israeli army watch-tower, with heart-shaped emojis added alongside paint splashes and soot stains left by Palestinian demonstrations.</p> <p>The artist, who goes by the alias @LushSux and who Australian media have said comes from Melbourne, did not immediately respond to a request for comment.</p>
no comment