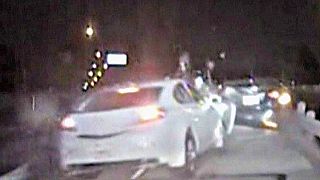 Updated: 04/08/2017
<p>A police officer miraculously recovers and stands right back up after a drunk driver crashes into him, sending him flying in Fort Worth, Texas on July 7. </p> <p>In the Fort Worth Police Department dash camera video, Officer Matthew Lesell can be seen pulling a driver over for a traffic stop when a second car can be seen crashing into him at around 3:00 am in the morning. </p> <p>Incredibly, Lesell can be seen getting right back up. Local media also reported that the driver who injured Lesell was charged with drunk driving.</p>
no comment