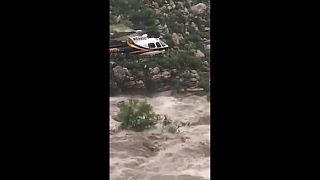 Emergency services in Arizona have had to rescue several people after flash flooding tore through a normally quiet creek.

Seventeen hikers were stranded on Sunday in a scenic canyon on the outskirts of Tucson, just over a week after floodwaters killed 10 members of an extended family more than 140 miles to the north.

Unpredictable summer storms can rapidly wash churning torrents into canyons in the US state and trap those looking to take advantage of cooler weather after rain.

In southern Arizona, two hikers were lifted to safety after they spent the night stuck on the side of a cliff in a rocky, narrow canyon, authorities said.

There was no immediate indication that any of the hikers were seriously injured.

Police say people often decide to go hiking once it stops raining, not realising that the water they see in the creek is from much earlier rainfall, not the storm that has just ended.