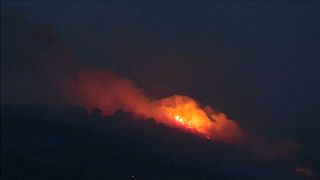 Updated: 25/07/2017
<p>Firefighters have been battling a large blaze in the town of Ramatuelle, about 10 kilometres from the popular seaside resort of Saint-Tropez, in southern France.</p> <p>The flames spread quickly due to strong winds, with the fire having spread more than 200 hectares in the first hour, authorities said.</p> <p>Early on Tuesday morning the head of the command post, Lieutenant-Colonet Michel Dutreux, said the fire was not yet under control. </p> <p>A number of fires in southern France were still active, and the department was struggling to fight so many at once, he said.</p> <p>Authorities said on Monday (July 24) fires had destroyed around 1,400 hectares of forest and woodlands in the south of France and on the island of Corsica.</p>
no comment