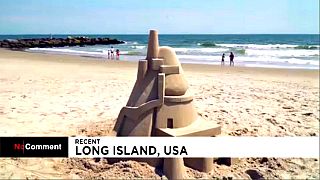 57-year-old artist, Calvin Seibert, has been creating sand castles since he was a small boy.

His daily commute to Long Island’s Rockaway Beach is a long one, over an hour from his Manhattan home.

But he goes there with homemade tools, water, imagination, and considerable skill, to turn one of the most common things in the world into structures that are anything but.

Seibert almost chose a career in architecture, until he had a sudden realisation. Art, for art’s sake.

Earning his living as an artist’s assistant, Seibert will occasionally sell a photograph of his work, but money has never been his motivation.