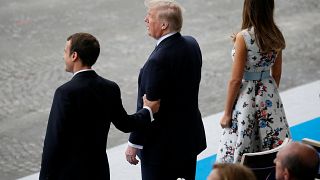 The ceremonies closed the two-day official visit of the U.S. presidential couple in the French capital.

Macron opened the parade on the Champs Elysees by standing in a military jeep surrounded by cavalry, repeating a scene from his inauguration two months ago and reinforcing the message that he heads an important military power.

Trump saluted as U.S. military personnel – some in World War One battledress – opened the march-past with the Arc de Triomphe in the background.

The two heads of state sat together in a stand applauding, pointing and touching each other on the arm as military aircraft flew overhead.

The two men hugged at the end of Macron’s speech, in which he thanked the United States for coming to the aid of France a century ago marking 100 years since the U.S. entry into World War I.

Together with their wives, the two leaders stood in respect in front of the US and French flags.

Having arrived in France on Thursday, Trump will depart Paris on Air Force One, heading back to the United States.