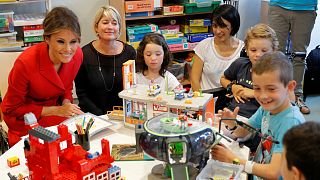 The Necker Hospital is one of Paris’ oldest and was founded in 1778. American artist Keith Haring gave a large, multicoloured totem sculpture to the hospital in 1987, called “The Tower.”

Melania Trump toured the hospital shortly after her arrival in France with President Donald Trump aboard Air Force One.

The first lady was greeted by senior Paris medical officials during the tour and later met with some of the hospital’s young patients.