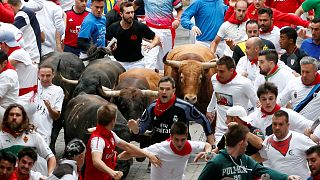 Two runners were gored and six others had to be treated for injuries at Pamplona’s San Fermin festival.

The extravaganza in northern Spain sees 2,000 people – many wearing the traditional white shirt and red scarf – dodge a dozen bulls and steers rampaging through the city.

The final run of this year’s festival – famous for its daily, 8 am, 875-metre sprints through uneven streets – will take place on Friday.