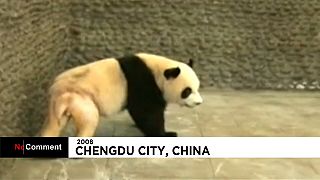 Updated: 09/07/2017
<p>A video of a giant panda with the hair on his hind legs shaved off recently went viral online in China turning him into an overnight “celebrity”, even though the video was shot in 2008. </p> <p>The 2008 video captured the panda, Yuan Xiao, limping around his enclosure seemingly unaware of being “stripped” of his pants. </p> <p>At that time, Yuan Xiao was wounded during a panda “gang” fight when he used to live in the Chengdu Research Base of Giant Panda Breeding of southwest China’s Sichuan Province and vets had to shave his hind legs in order to properly treat the wound, therefore stripping him of his pants.</p> <p>Yuan Xiao, who now happily lives in a zoo in Qingdao City of east China’s Shandong Province, did not receive the attention he deserved for showing off his naked legs back in 2008 as the internet was not readily accessible in China as it is now.</p> <p>However, it is never too late to claim to fame, as someone finally posted the video online, and netizens went wild for Yuan Xiao calling him the panda that was stripped of his pants. </p> <p>Even his own breeder did not know about such an experience. </p> <p>“Yuan Xiao has always been a healthy panda here. We didn’t know he had such an experience. We contacted the Chengdu Research Base of Giant Panda Breeding to verify it and they confirmed that Yuan Xiao is indeed the one that was stripped of his pants,” said Duan Meiling, a panda breeder with Qingdao Zoo.</p>
no comment