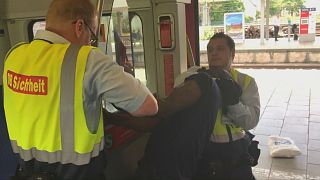 Police in Munich in Germany are investigating an incident in which two security guards were filmed forcefully removing a man from a metro train.

As the man grips on to handrails inside the carriage, with many commuters looking on, one guard keeps him in a headlock while the other attempts to loosen his grip on the rails and lift up his legs.

The man is not violent towards the guards and does not say anything. At one point he yells out in pain.

The video does not show the events leading up to the commuter being physically manhandled by the guards.

It is alleged the man was travelling without a valid ticket, according to local media.

Once dragged off the train the commuter was held down on the platform, with pressure applied to the back of his head.

Miletic objected to the way the man was handled, accusing the Deutsche Bahn personnel of being “racist”.

The reporter is heard in the video saying: “This is absolutely not okay what you’re doing. The guy didn’t do anything to you guys. You should be ashamed of yourself.

“This is racist what you’re doing. Why are you doing this? It’s because he’s black.”

The man also says: “Tell me what I did?”

Local media report that a complaint of grievous bodily harm has been lodged with the police.

Both Deutsche Bahn and the police are investigating the incident, calling for witnesses to come forward.

Deutsche Bahn told German media it was “concerned” about the incident and “regretted” the violence seen in the video.

The company says the two guards involved in the incident are currently not doing any control duty.