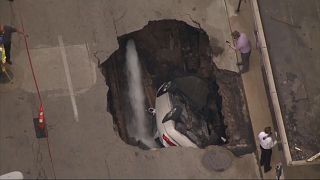 Parked car swallowed up by sinkhole

A sinkhole opened up and swallowed a car in downtown St. Louis (USA) Thursday morning.
Aerial TV footage shows the white car on its side in the hole, with water gushing from a below-ground pipe.
The owners of the car say they were coming back from the gym when they found their car had been swallowed by the large crater.
There are no known injuries.