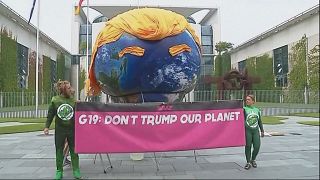 In a open letter to German Chancellor Angela Merkel the NGO urged her to lead the world to a 100% clean energy future.

The letter reads as follows:

“Dear Mrs. Merkel,
We reject Trump’s attempts to divide the world on climate change.
And we call on you to lead us to a safe, sustainable future, with or without the USA.
As you welcome the G20 to Germany, we ask you to stand up to Trump by leading the 19 remaining countries to commit to a 100% clean energy future.
As the ‘Climate Chancellor’, your leadership has given us hope that climate catastrophe can be avoided. That hope is precious. Billions across our beautiful planet are now counting on you to protect it.”

“We are here today in front of the Federal Chancellery to call the G19 to: `Do not Trump our Planet!`. It is very important that Angela Merkel take the lead during this summit, next week in Hamburg and take all the other 19 states with her. We say: `No matter what the US is doing, whether it`s going to cooperate or not, we must continue to work hard for the Paris deal, and we must continue to work hard for climate protection and move the world towards 100% clean and renewable energy. And behind us, we see a world with a Trump wig on top of it, and the superheroes of the G20, so we hope at least, Xi from China, Macron, Modi and Juncker for the EU. We must realize that these countries have to again strongly commit to climate protection, in order to make the world move forward as a whole, no matter what the US does,” said an Avaaz spokesperson.