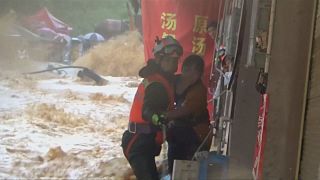 Torrential floods, triggered by the continuous rains, trapped some residents in a residential community in the city of Tongren, Guizhou Province, on Saturday.

The rising water level and fast-flowing water made the situation quite dangerous. After an operation lasting several hours, the rescuers evacuated more than 2,000 people, and rescued 61 residents stranded by the flood.

A massive search and rescue operation is underway to find at least 93 people missing after a landslide hit the village of Xinmo in mountainous Sichuan province.