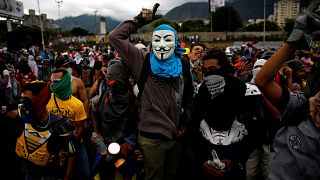 Clashes in Caracas as Venezuela opposition rally over activist's death

In Venezuela, clashes erupted in Caracas on Saturday as thousands of opposition protesters rally at La Carlota air base.

The opposition organised marches to military bases around the country to demonstrate against the killing of a 22-year-old activist who was shot dead by a military police sergeant on Thursday, as youths tried to pull down the fence around an air force base in Caracas. .

The event started peacefully, but it wasn’t long before clouds of tear gas filled the area sending protesters running.

At least 75 people have died in clashes that began three months ago.