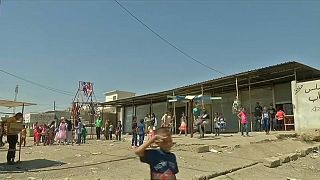 After ISIL, Mosul has an Eid to really celebrate

Mosul residents celebrated their first Muslim Eid holiday without Islamic State in three years on Sunday (June 25), amid sadness over the destruction of their beloved leaning historic minaret and hope that the battle to take back the city will end in a few days.

Children gathered in squares of the eastern side of the city, with some playing on old swings and others carrying toy guns and rifles which were among the toys allowed by militants after they took over the city in the first days of June 2014.

Although Iraqi forces dislodged the insurgents from this part of the city months ago, battles are still raging on the western side across the Tigris.
Iraqi authorities were hoping to declare victory in the northern Iraqi city in the Eid, a three-day festival which started on Sunday for Mosul’s Sunni population and many Iraqi Shi’ites, celebrating the end of the fasting month of Ramadan.