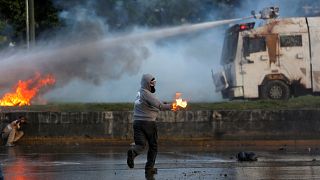 At least two soldiers shot long firearms through the fence at protesters from a distance of just a few feet. One man collapsed to the ground and was carried off by other protesters, television footage showed. Paramedics took at least two other injured people to a hospital, a Reuters witness said.

The protesters began attacking the fence outside La Carlota airbase in the wealthy east of Caracas when security forces broke up a march destined for the attorney general’s office.
A man identified as David Jose Vallenilla, 22, died after arriving at a hospital in the Chacao municipality where the protest happened, the mayor said.
Opposition lawmaker Jose Manuel Olivares said Vallenilla had been killed by the national guard firing rubber bullets at point blank range and criticized the shooting as repression.

“The troops found responsible for crimes will be presented before the law,” said Interior Minister Nesto Reverol, calling on the opposition to stop violent protests.

Vallenilla suffered wounds to the lungs and heart, a doctor who attended him told Reuters. Reuters could not independently confirm that Vallenilla was the shooting victim shown in television footage.

Venezuela’s national guard is a wing of the military charged with internal public order. It mainly uses tear gas, water cannons and rubber bullets to control protests that frequently escalate into riots.
Despite volleys of tear gas and rubber bullets, a small group of protesters throwing petrol bombs and powerful fireworks from behind flimsy homemade shields was able to rip down a section of the fence surrounding the airbase. Hundreds of thousands of Venezuelans have taken to the streets over the past months to protest a clampdown on the opposition, shortages of food and medicine and President Nicolas Maduro’s plan to overhaul the constitution. Maduro says the violence is part of a foreign-led plot to overthrow his government.