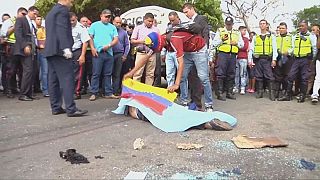 A student has died in heated protests in Venezuela, further swelling the numbers killed in unrest in the crisis-torn country. Luis Vera, 21, was run over in the western region of Maracaibo. His death brings the protest death toll to at least 69. Angry at widespread shortages, three-digit inflation and rampant crime, demonstrators are demanding early elections. But President Nicolas Maduro accuses the opposition of stoking violence as part of a US-backed coup.