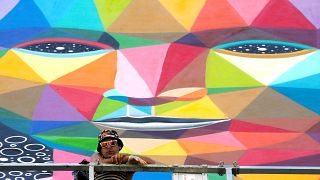 A street artist is brightening up a high-rise block of flats in Paris by giving it a contemporary makeover.

Spain’s Okuda is spray-painting a colourful version of the famous Mona Lisa on the side of the building, creating one of Europe’s tallest murals at 50 metres (164 feet) high.

The reinterpretation of Leonardo da Vinci’s masterpiece, also known as La Gioconda, depicts a standing woman in a miniskirt holding a handbag.

Spanish street artist Oscar Okuda poses while painting a fresco representing the “Mona Lisa” on a building in the 13th district of Paris pic.twitter.com/2It6i3gDeo

He said: “I think it’s like the new vision of the Gioconda, and for me it’s like a multi-cultural-skinned woman, that has different fabrics like from different parts of the world.”