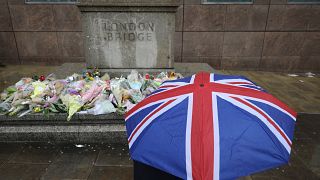 A rainy morning on London Bridge

Updated: 06/06/2017
<p>British Police remained around London Bridge on Tuesday morning, almost three days after seven people were killed in a van and knife attack on the bridge and nearby restaurants.</p> <p>A makeshift memorial filled with flowers could be seen in the middle of the street as Londoners made their way to work.</p> <p>New safety barriers were also installed across the bridge overnight.</p>
no comment