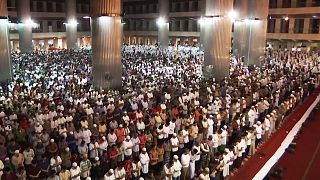 More than 200 million of Muslims in Indonesia have started fasting on the first day of the holy month of Ramadan.

In the grand mosque of Istiqlal in Jakarta on Saturday (27 May), hundreds of people gathered to break their first day of fasting.

Indonesia is the world’s largest archipelagic nation with nearly 90 percent of its 256 million population Islamic followers, making it the world’s most populous Muslim nation as well.