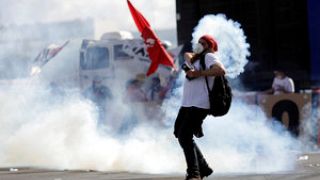 Around 300 people gathered to protest against pension reforms outside the legislative assembly as it voted to increase pension contributions by state workers, many of whom haven’t been paid in months due to the city’s financial crisis.

On Wednesday, Brazil’s president deployed the army to restore order in the country’s capital Brasilia after demonstrators staged running battles with police.

Temer, a former vice president whose government’s approval rating is in the single digits, took office a year ago after former President Dilma Rousseff was impeached for breaking budgetary laws.

Rousseff and her supporters labelled that a “coup“ orchestrated by Temer and his allies in an effort to halt a sweeping, three-year corruption probe that has placed scores of sitting politicians under investigation.