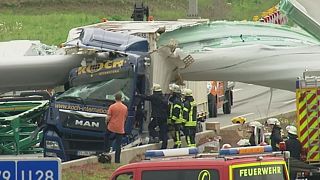 Updated: 17/05/2017
<p>In a collision on a motorway (Autobahn 33) near Bielefeld in Germany, the wing of a huge wind turbine drilled through the driver’s cab of a truck. Although the cabin was completely destroyed during the spectacular accident on Tuesday, the 61-year-old driver suffered only minor injuries.</p> <p>The carrier from Bremerhaven, loaded with a 62-metre-long wing, was about to leave the motorway early in the morning when the lorry and its escort vehicle collided. As the lorry driver took evasive action, the wing was pushed by the transporter and swung across the opposite track, coming to rest across the road.</p> <p>A spokeswoman said the accident caused more than 520,000 euros worth of damage.</p>
no comment