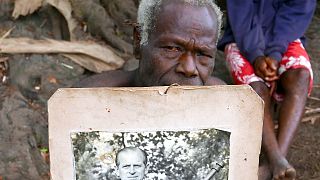 Duke of Edinburgh admired as a god

A tribe in Vanuatu was shocked and dismayed to discover on Saturday (May 6) that the man they pray to as the son of an ancestral local mountain god will likely never return to their Pacific Island home.

Britain’s Prince Philip, who said he would no longer take part in public engagements, is part of the fabric of life in the village of Younanen on Tanna Island. Villagers pray to the 95-year-old prince daily, asking for his blessing on the banana and yam crops that make their primitive and extremely poor community self-sufficient.

Villagers have several photos of the prince, including one from 1980 of him in a suit, holding a club they made for him and sent to London. Anthropologists believe Philip, who fitted the bill by marrying a powerful woman, became linked to the legend in the 1960s when Vanuatu was an Anglo-French colony known as the New Hebrides. Villagers at the time were likely to have seen portraits of Philip and the Queen at government offices and police stations run by colonial officials.