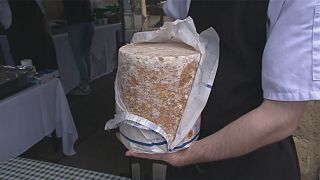 There was high drama at the traditional May Day Cheese Rolling World Championships in Stilton, UK.

The teams were made up of four competitors each, who worked together to roll a special wooden cheese along a road in Stilton, which is famous as the home of the smelly snack. Many competitors wore elaborate outfits and masks.

There were three separate categories for juniors, men and women, with hundreds of spectators looking on.

The Stilton race is not linked to another traditional cheese rolling event (also pictured), which takes place on Cooper’s Hill in Gloucestershire and sees scores of competitors race downhill in pursuit of a wheel of cheese.

This competition is due to take place later in May.