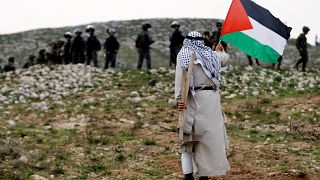 Residents of the West Bank village of Madama, south of the city of Nablus, on Thursday marked ‘Land Day’ along with Palestinian activists.

Demonstrators clashed with Israeli security forces trying to prevent them from doing so.

Land Day is the annual commemoration by Palestinians of the killings of six Arab-Israelis in 1976 by Israeli police during protests over government confiscation of Arab-owned Land in northern Israel.