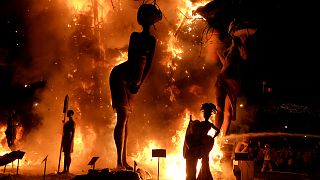 The Spanish city of Valencia’s five day festival known as Las Fallas ended at midnight on Sunday (March 19) with a ceremony in which nearly 380 papier-mâchés sculptures were set alight.

The crowded city, which celebrated the annual tradition with fireworks, costume parades, paella contests, bullfights and street parties for almost a week, came to an end with the burning of the famous “ninots” sculptures located all over the city.

The big papier-mâché statues usually represent Spanish political events in an ironic and sarcastic way, laughing at politicians, stars and local stories, but they also include recent events from the world agenda.