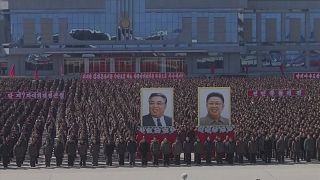 Updated: 07/03/2017
<p>North Korean authorities gathered more than 50,000 people together on Monday in a show of support for the country’s latest mobilisation campaign.</p> <p>The rally took place in Wonsan on the east coast of the country. It is the main city in Kangwon Province, which has recently been highlighted as an example for the rest of the country to follow.</p> <p>North Korean leader Kim Jong-un did not attend, but Premier Pak Pong-ju was there.</p> <p>North Korea announced a new five-year economic plan in 2016, and since the latest rounds of UN sanctions following its nuclear tests, it has been telling its people to use self-reliance and self-development to grow the economy.</p> <p>Slogans plastered around the country promote “Mallima Speed”, which refers to a Korean legend of a horse that can travel at incredible speeds.</p>
no comment