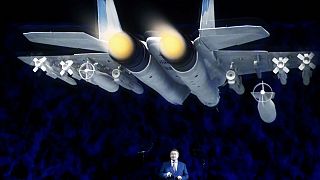 Russia has been showing off the latest generation of its MiG-35 fighter jet.

The twin engine jet will replace the MiG-29, which has been used by the Russian airforce since the 1980’s.

The 37 new planes will cost Russia over €1 billion, but they will be able to fly at up to 2,400 kilometres per hour.

According to Air Force commander Viktor Bondarev there are plans to buy as many as 170 of the planes.

It is said to be the first jet to test the use of laser weapons, which could be mounted on the jets in future.

Flight displays took place at an airfield in Lukhovitsy, 150km south-east of Moscow, where the plane is built.