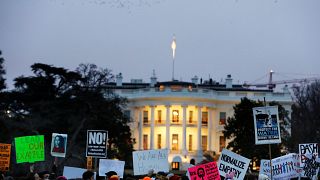 "Not our president!" shout angry protesters in the US

Tens of thousands of demonstrators filled the streets of downtown Los Angeles and San Francisco with signs decrying US President Donald Trump.

Chanting in English and Spanish, a cross-section of the cities diverse religious, ethnic and LGBT groups marched in solidarity Saturday with the Women’s March on Washington. San Francisco’s march took place later in the day and attracted tens of thousands of people, according to early estimates.

The crowd at Saturday’s Women’s March in Washington exceeded the 500,000 that organisers had told city officials to expect. Thousands of women descended on the US capital and other cities around the world for marches organised to push back against new president Trump.