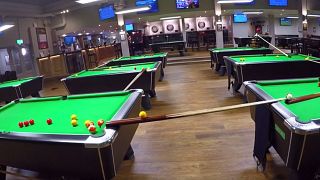 Shot of the day

Updated: 11/01/2017
<p>Most people celebrate the new year with a party or a resolution but for one English pool and snooker club it was by pulling off one of the most elaborate trickshots caught on camera. </p> <p>Club members at All Stars Bristol spent a whole night setting up the trick which saw a ball go down a flight of stairs before triggering a sequence of events across nine tables with a golf ball eventually ending up in a hole at the club’s bar. </p> <p>The trickshot took two minutes from beginning to end and it has already had over one million views on its Facebook Page since being uploaded on Sunday (January 8).</p>
no comment