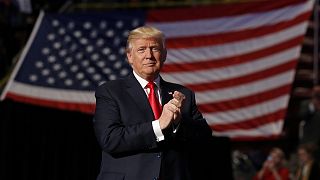 Trump vote goes back to college

As Washington prepares to inaugurate the 45th president of the United States; Donald J. Trump faces one final hurdle.

The electoral college has to ratify state results.

The Republican members of the college, known as electors, have come under intense pressure to do an about turn and abandon Trump.

Not all Republican electors see Trump as a great president to be, in fact many feel embarrassed by his election.

However, despite hostility to Trump they feel bound by duty, history or party allegiance to rubber-stamp the results.

Some celebrities are teaming up to urge Republicans in the Electoral College to vote against President-elect Donald Trump. pic.twitter.com/fJAVZcdIdE

There are 538 electors and a threshold of 270 hands the keys to the White House to the winning candidate.

VIDEO : Bill O’Reilly “Liberal Media Hatred Against Trump is Out of Control” https://t.co/qYDbko6mURpic.twitter.com/2hIbktJUP2

If Trump’s campaign behaviour and subsequent performance as president elect appalles 36 electors and they change their vote then the 12th amendment will kick in and the decision as to who will be the 45th president will rest with the House of Representatives.

House Republicans Are Already Pushing Back Against Trump https://t.co/M35YcaZoc8pic.twitter.com/1HeqPFZRgH

The grief that has greeted Trump’s victory has sent America into a frenzy, with opponents attacking the existence of the college process, without which Clinton would have won the election by 2.6m votes nationwide.