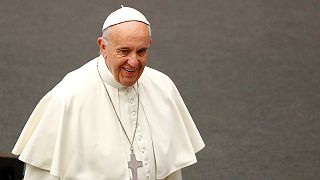 Pope hopes his birthday is not jinxed

Pope Francis, responded to thousands of people cheering “Happy Birthday” on Wednesday (December 14) by joking that doing it early may bring on a jinx.

The pontiff will turn 80 on Saturday, December 17 th.

“Thank you very much for your greeting for my upcoming birthday,” the Argentine pope said at his general audience, the last public appearance before his birthday.

“But I’ll tell you something that will make you laugh. In my country, expressing greetings ahead of time brings bad luck and those who do it are jinxers,” he said.