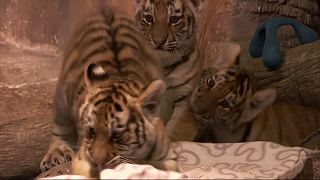 Updated: 04/12/2016
<p>Three Amur tiger cubs have made their public debut at the Milwaukee County Zoo the pair wrestled and played with each other in front of excited visitors.</p> <p>The cubs are two females and one male named Eloise, Bernadette and Kashtan. They were born 14 September</p> <p>Zookeeper Amanda Ista says the cubs are doing well but the male is now being hand-raised.</p>
no comment