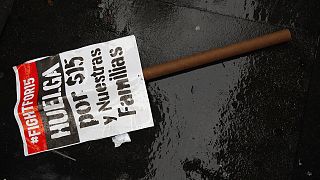 In New York City, more than 200 protesters held a pre-dawn rally outside of a McDonald’s restaurant, where they chanted slogans calling for a minimum wage of $15 (USD) an hour.

Home health and child care providers and some drivers for ride service Uber Technologies Inc joined the action, which is backed by the Service Employees International Union.