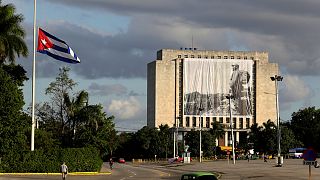 Flags fly at half-mast across Havana

Elsewhere in Havana, thousands of Cubans lined up near Revolution Plaza, carrying portraits ofCastro, flowers and Cuban flags for the start of week-long services bidding farewell to the man who ruled the country for nearly half a century.

Virtually all schools and government offices were closing during the homage to Castro, which will stretch for 13 hours on Monday and begin again on Tuesday, ending in a rally echoing those that Castro addressed on the plaza for most of his time in power.