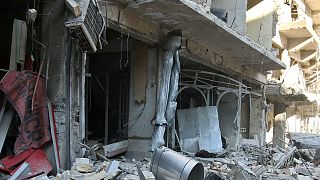 Boy and girl rescued through the rubble in Aleppo

Videos appear to show a boy and a girl being rescued by members of the Syrian Civil Defence, more commonly known as the White Helmets.

In the first incident, filmed at night time, the rescuers can be seen digging inside a damaged building in order to reach the child, who was covered in dust and patches of blood.

In the second incident, a young girl is seen being rescued from the site of a damaged building after rescuers manage to remove the rubble trapping her.