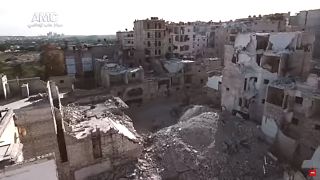 Drone footage released by a pro-rebel media group based in Aleppo shows the extend of the destruction of the city.

With empty streets and grey, cratered buildings, the scene resembles an alien planet more than a living settlement.

Nevertheless, bombardment by Syrian government fighters and Russian jets goes on, despite attempts to negotiate an escape for those trapped inside.