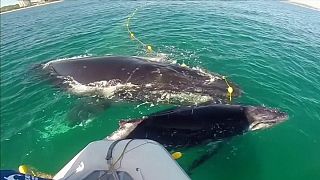 Humpback whale calf freed from a shark net in Australia

A mother Humpback whale received the assistance from the Sea World Rescue Team to free her calf who was entangled in Shark Control netting in Australia. The calf was entangled off Coolangatta Beach, in the western Australian City of Gold Coast, accompanied by its mother who was trying to push it above water to breathe. Two patrol teams went out on rubber dinghies and cut the netting to free the calf.